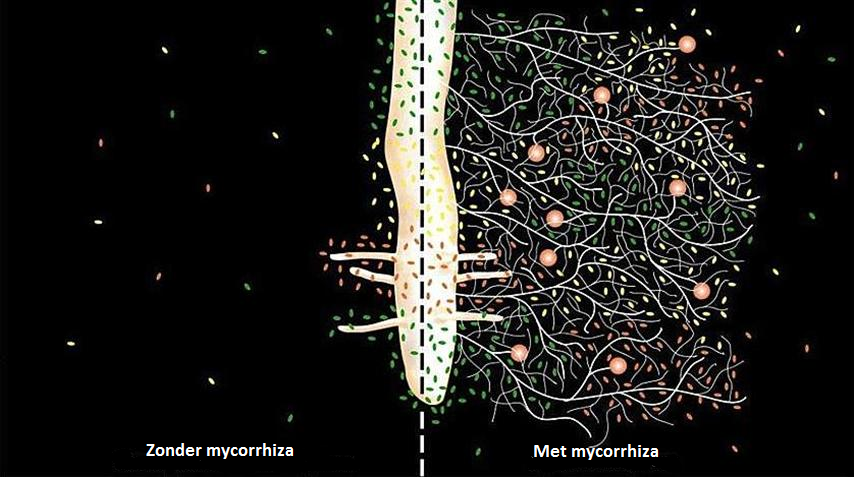 A fungus or mould will probably make you think about a green-specked rotten apple or spoilt slice of bread. However, there are many more kinds. Take for example all the kinds existing in the soil. A major part of biomass under the soil may consist of soil fungi. They can be found in a great variety of kinds and sizes and they play a very important part in the soil’s ecosystems.

Partnerships between plant roots and fungi are very common. Such a partnership is also called a mycorrhiza. Four different types can be distinguished, dependent on the way in which the fungus grows. Many tree species cannot grow without a partnership with certain soil fungi. In this relationship between plant and soil fungus the fungus receives carbon and energy from its host, enabling the fungus to continue its growth. The fungus extracts phosphor and other nutrients from the soil and transports them to the plant roots that will absorb these substances, enabling the plant to grow.

Mycorrhiza gives plants some protection against soil infections. Their general tolerance is increased through their improved conversion of nutrients and water (nutrient supply), particularly when it comes to micronutrients. Phytoalexins produced by plants are a threat to the attacking organism in the soil, but mycorrhiza fungi may also have a direct inhibitory effect on the development of pathogens, for instance through the secretion of antibiotics or the competition for infection herds and sugars.

In order to grow healthy plants the presence of mycorrhizas is, in fact, a precondition.

Mycorrhiza is an important element of the underground nutrient network and stimulates an abundant soil life. Compared to root systems without mycorrhiza, the so-called mycorrhizo area of hyphal threads contains not only different kinds of microorganisms but also five times as many microorganisms.

BAC offers 4 types of mycorrhiza in one single jar under the name Funky Fungi. Combined with our stimulants these fungi will colonise faster and more continually in the area surrounding the root system of your crop. The fungi need to touch the roots. Once established, they will grow alongside the roots. A dose of just 5 grams per plant, independent of the container size, will be sufficient for an optimal growth of your plants.